Simon Says: The Medals, London and The Legacy 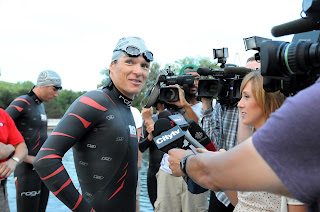 
I was living in Vancouver, BC back in 2000. A small group of the Vancouver triathlon community gathered to watch the inaugural Olympic Games Triathlon in Sydney at a well known downtown pub.

Going into the Games, Vancouver's Carol Montgomery had been on fire on the World Cup circuit. Indeed, prior to even getting to the games Carol had accomplished an unprecedented feat in modern Olympic sport, which I don't think has been duplicated - she had qualified in one Games for two different sports. Triathlon obviously, but she had also qualified in Athletics in the 10,000m on the track for Canada as well, and was set to race in the 10,000m final for women on the track later in the games after the triathlon.

We settled into watch history in the making and fingers crossed - witness a win or at the very least, a medal for Carol and Canada. Alas, it was not to be as Carol crashed on the bike, broke her wrist, and was unable to go on. It also took her out of the 10,000m race on the track. We all left the pub a bit disappointed that night.

The next day was the men's triathlon.  For this race I found myself watching on TV with my three year old son, Matthew in the basement of our house, alone other than the two of us. We all know the outcome to this - Simon Whitfield raced to a gold medal, and into, not just triathlon history but into the history of sports in Canada in a big way!

When I realized that Simon had won, the tears started to pour out of me in a completely uncontrolled manner. My son, sitting on my lap, asked, "Dad, why are you crying"? I said, "Simon just won the Olympic games triathlon and the Gold Medal", as I sat there on the couch over-come with emotion. I am not sure if Matthew understood the massive significance of this.

In Canada, this was not just sports news, it was front-page-of-paper, lead-story-on-the-TV-news, news! In fact, a few days later, I was asked on as a guest on the CBC TV Morning News show, to comment on the significance of Simon's Gold Medal win and what it would mean for Canada and for the sport of triathlon.

In a way, we (the sport of triathlon in Canada) were not really ready for it - suddenly all eyes were on Simon and the sport of triathlon. This level of attention and exposure for the sport was completely unknown. But on the whole - looking back, it was the best thing that could have ever happened.

A lot has happened in the ensuing 12 years. Simon, "The Kid", who won in Sydney is now nearer to 40. He won another medal, Silver, in perhaps in even a more stirring and dramatic fashion, four years ago at the Beijing, Olympic Games. The sport of triathlon in Canada has grown up a lot and matured in Canada and elsewhere. We now have a history, and knowing Simon well, one of the things he is most proud of, is a legacy that is starting to build in Canada, because of his success - people take the sport seriously, and some of the current top talent in the country, in particular Multiple World Cup winner, Paula Findlay and a fellow London Olympic Triathlon team member, are a direct result of that legacy.

The ultimate symbol of this, occurred a few weeks ago when Simon was named the Flag Bearer for the Canadian team at the London Olympic Games opening ceremony. Wins and medals aside, there is really no greater honor than to be recognized by your fellow sportsmen and your country. No doubt a proud moment for Simon, and his family, but also for the whole sport of triathlon as well!

This is important stuff - this winning, these performances, the medals, the exposure, the legacy, the pride. I was a guest speaker at the Timex Triathlon Team launch back in February this year. In my remarks at the team dinner and awards, I said, that I really hoped that the United States, could win a  Gold Medal in triathlon at the Olympic Games - maybe even in London ( with apologies to Simon!). It would not only be a big shot in the arm for triathlon, and International Triathlon Union style racing in the United States, but for the whole sport, and business of triathlon - with much of the latter, on the product side, centered in the United States.

Something has not changed since Sydney - that glint you see in Simon Whitfield's eye. It's that slightly mischievous and comedic, look people have when they have something up their sleeve - that he knows something big and important is about to happen. Yet, he's still joking and jovial as ever! That's Simon. I think it's his secret weapon - as it's the polar opposite to the deer-in-the-head-light look of most other athletes at this level prior to the Big Race. I saw that look on Simon, yesterday at the Toronto Triathlon Festival, standing with him on the dock just before the start of the demonstration event that he was doing with Paula Findlay, Andrew Yorke and Mike Greenberg. That means he's ready!

I say watch out, London and make sure that you tune into the  Men's Olympic Triathlon coverage on August, 7th (6:30am Eastern Day Light Saving Time) to watch the final chapter. I know that I will be!

What are your thoughts on the men's Olympic Games Triathlon and what the results will mean?

2000 was my first real dip into triathlon, not just the sport, but the lifestyle and the love affair.

Sydney, Athens, Bejing and now Sydney have all brought tears caused by Simon. This year it's the Legacy and the public display of what an incredible person he is. Proudly carrying the flag, sticking up for Paula, tweeting the women's race for the world to watch, his response to his crash, the embrace with his family, the outpouring of support from his fellow athletes... Simon is truly the stuff legends are made of.

It was just before the Sydney Games in Kananaskis, AB that I first met Simon, at the Canadian Duathlon Championships. He was there for a pre-Games tune-up and stated, "I wanted to go the Olympics a National Champion", don't quite remember why he didn't race Tri Nationals. After my 10 seconds of clapping atop the Under 19 podium, I shook his hand and wished him luck. He was the most genuine guy and said, "Thanks, and good luck to you in France". I didn't get a photo of that moment, but I'll never forget it.

Sam - There is no doubt that Simon has been a tremendous source of inspiration to many, at a number of different levels.

Thanks for this wonderful blog.
triathlon medals

stream now free!!!!
only for you https://bit.ly/2LHpNcQ
the time is like the zord